IAM2020 – Our Voice, Our Choice for Working Peoples Issues
Free College for Members and Their Family
Lynn
Community Service, Uncategorized 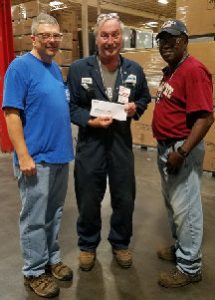 THE MACHINISTS UNION GETS A HUGE WIN IN TN

In Feb 2018 Goodman/Daikin management at the  plant in Fayetteville TN ,terminated a 42 year employee and Union Member of Local 2385.  Not only has Steve Tucker been a Union Member since 1976, he also currently serves as a Shop Committee Member of this local and is retired from the National Guard after serving for over 30 years.  The Company challenged his character by saying he had stolen company property and therefore terminated him in Feb. 2018.  The Union Shop Committee tried and tried to work this case out prior to going to arbitration just to get the grievant back to work, so he could feed and provide for his family, but the Company said no to any offer the Union made. District 711 Business Rep. Mike Lee along, with the Union Shop Committee of LL2385 arbitrated this case on July 26th 2018.  Shortly thereafter Arbitrator J. Douglass Hagewood , upheld the grievance and ruled that the Company had terminated the grievant without just cause .This arbitrator did not buy into any bit of the Company`s evidence or argument that Mr. Tucker was guilty. With his ruling he ordered the Company, to pay the grievant Mr. Tucker with the complete 7 months (the time he had been out of work) back pay. This not only included 7 months at straight time pay (minus his unemployment that the State had awarded him), it also included 200 hours of OT @ OT pay rate.  The Company also had to give the grievant his match on his 401K that he would have been getting if he had not been terminated without just cause. People may wonder why they need a Union; well this is a perfect reason. Prior to this Mr. Tucker had only 2 write ups in 42 years of service and came to work every day.  Again this is the perfect reason everyone needs to be part of the Union. When you think it can’t happen to you, just ask Mr. Tucker because it can.